Tackling the Money Taboo — How to Talk About Your Finances

If you were like me, you didn’t. With little formal financial education and a social taboo around talking about money, many people are left in the dark.

When it comes to your career, financial education, and personal attitudes about money, silence hurts you.

Employers do not always pay what the work is worth; they pay what you think the work is worth. It is likely that as an applicant you have dramatically less information than your future employer about the market rate of the position you are applying for.

If you don’t have this information, you run the risk of asking for a salary of $45k a year for a role that usually pays $70k.

This is not right– financial rewards should not go to those who negotiate aggressively, threaten to quit, or have relationships with people “in the know,” but rather to those who objectively demonstrate effectiveness in their role.

Many people find out what their coworkers make by accident—someone mentions a number offhand or a screenshare lets slip some salary information.

Some companies have started to experiment with transparent salaries, such as Whole Foods and SumAll, and the tech start-up Buffer went a step further by publishing their salaries publicly.

Buffer experienced a jump in applications when the salaries went public. Accountability and trust increased as they tackled bias in salaries with a formula. People who disagree with their compensation have the recourse to negotiate the formula itself, which would in turn make pay fairer for everyone.

This is certainly a more productive way to handle pay differences compared to stewing over why Thomas is making more than you even though he sits around scrolling through Twitter all day.

Research backs up the efficacy of pay transparency for companies. One study’s results indicate that “pay secrecy has an adverse impact on individual task performance.” Another study reported:

This backs up Whole Foods co-CEO John Mackey’s hypothesis that if employees had a clear vision into what types of performance and achievement earned certain people more money, they would be motivated to improve.

Pay transparency is also an effective weapon against the gender pay gap.

If there is a formula at play, unjustified pay gaps due to bias can no longer grow insidiously in the shadows. The 2017 Institute for Women’s Policy research found that the gap for full-time workers in the private sector was 20%, compared to government positions with published pay at 10%. Armed with more complete information, employees are empowered to improve their own salaries.

Research is already turning up evidence that companies benefit from transparency-based salaries, but what does that mean for you on a personal level? Should you send out an office poll asking everyone to cough up their compensation?

There are laws protecting workers from retaliation for sharing salary stats, but social norms are still in place that discourage sharing.

Consider how knowledge might change the dynamic in the office.

Are you prepared to find out that twitter-scrolling Thomas makes more than you?

My roommate started working at the same company as me. One day we were both standing in the kitchen when she lowered her headphones and asked me, “What do you make?”

I felt trapped– I had been there a few more years and likely made more than her, would this make her jealous?

I sidestepped the question by sharing the range for entry-level positions. “I make 55k,” she said, turning back to the stove to stir her soup. It was 10k less than what I had started making at the company in the same role.

Considering motivation is important. My roommate just wanted to know if she was being paid fairly.

She inspired me for being so brave and breaking the taboo to ask me in the first place, so I told her what I made. Though I was initially caught off-guard, the conversation flowed to other areas such as negotiation (she hadn’t negotiated; I had), career advancement (I had two promotions in two years), and our overall career goals.

How to Know When To Ask For Help

The shroud of silence around personal finances means asking for help can be awkward at best.

There are lots of opinions about how to handle money, thousands of funds and millions of companies to invest in. We act as if poor money management skills are something to be embarrassed about, which in turn feeds insecurities that hold us back from asking for help.

Avoiding talking about money inhibits us from making sound financial decisions. If parents in debt do not talk about finances in the home, it predicts problematic credit card use in their children. “Personal” finance is not the same thing as “private” finance. You should not have to make money decisions alone.

Consider the education system: there are advisors to help decide which classes to take for your particular goal.

There is no embarrassment in asking what classes a fellow classmate is taking. In fact, by talking to his classmates just this year, Mr. Mechanic realized he could graduate three months earlier if he filled out some extra paperwork. Imagine if by talking to other people about money, you realize you can retire three decades earlier!

By talking to friends and family about money, our source of information grows and equips us to make better decisions. By being open about money matters you could find out:

Certainly there is a wrong time to talk about finances. It would be quite rude to ask a bride-to-be how much her wedding ring costs at her engagement party, for example.

However, my good friend shared with me how much she paid for her wedding, including a couple of breakdowns for things like photography and flowers. I am incredibly grateful for this information, as it provides context for me to consider for my future wedding.

Knowledge is power. Open conversations help to demystify finances. If the opportunity comes up, consider sharing expenses with friends.

The more people we talk to, the more data we have to act on.

In college, my friend group all professed to be broke, no matter what our financial situation really was at home.

This way we could include everyone, regardless of how much they could afford. We organized scavenger hunts around campus, went to the $1 movie theatre to see “new” releases, and took advantage of local free events around town. If we had worried about seeming ‘cheap,’ the social pressure to spend could have started a cycle of debt early on.

A Wells Fargo survey reported that 44% of Americans find personal finance more difficult to talk about than death, politics, and religion.

Time magazine found that 40% of couples don’t discuss finances prior to marriage, with Fidelity reporting that 43% of Americans don’t even know how much their spouse makes. Things are looking up in the next generations, however.

Millennials are beginning to be more transparent, with 97% saying they discuss finances at least once a month, compared with 88% of couples across age groups. Killing it! 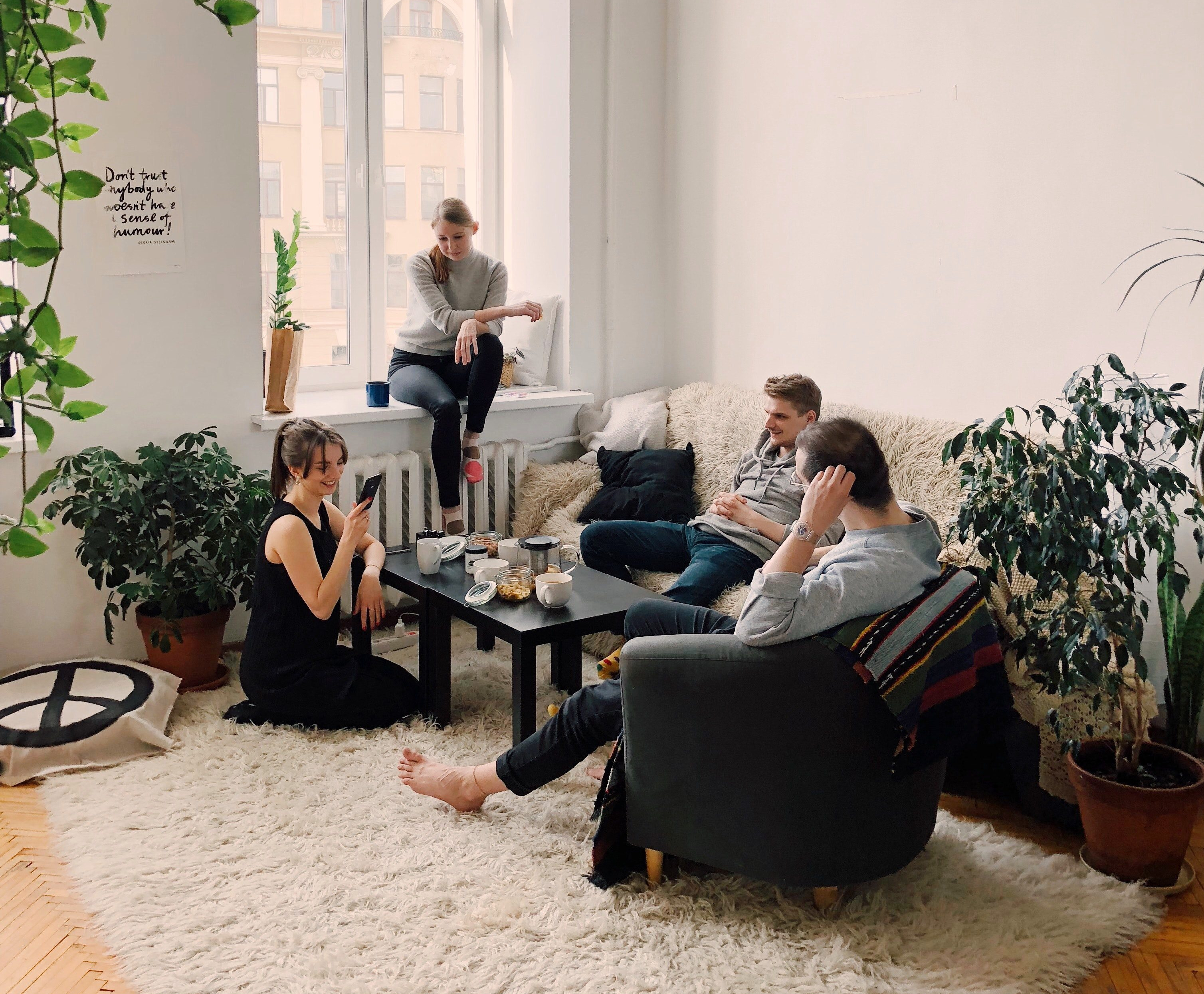 Sharing with friends and family could facilitate more creative and frugal hangouts with friends and potential dates. Rather than dinner and a movie, which can rack up the bill for singles trying to mingle, you can go on a picnic or to a local bookstore.

Being transparent with people in our lives can help us gain financial allies that help keep us accountable to our goals.

It is clear that silence around money hurts us.

It hurts us in job negotiations, in our financial literacy, and in our social interactions.

Collectively, we need to accept that money is complicated and in order to grow, we need to learn.

How much did your parents talk about money growing up? Do you know your coworkers’ salaries? How much do you share your financial situation with friends? Share in the comments below!

Forbes – Pay Transparency Is The Solution To The Pay Gap: Here’s One Company’s Success Story

Harvard Business Review – Your Coworkers Should Know Your Salary

Get Posts Delivered Straight To Your Inbox!

Cutting Hair (Out of Your Budget)

Seattle Roadtrip and Other February 2019 Expenses

I'm a mechanical engineer turned programmer with a pretty big DIY project: save enough money to become financially independent. Financial Mechanic is all about frugality, career climbing, and investing.

Check out the complete list of posts
Get Posts Delivered Straight To Your Inbox!

I write and maintain this blog for free. If you want to support the mission of Financial Mechanic and my writing, consider contributing a cup of coffee.

I Just Sold My Bike on Craigslist

7 Reasons You Need to Stop Riding Your Bike To Work

How I Became a Software Engineer Without a CS Degree

How Much Does It Cost To Adopt A Cat? A Comparison of Three Families

Financial Mechanic Is Featured In….